Moving over and in: Paris to home, January 2015

Unbeknownst to me, of course, the train station wasn’t far from my modest hotel, in Montmartre. This meant, of course, that I parted with another of my limbs in payment for a taxi, fetched for me by a touter who no doubt spends his holidays in the Seychelles in the cabin next to the driver who took me to Camping Les Clairettes, if you will remember from episode (2). On the other hand, I was in Monmartre! A fact that only really dawned on me after a couple of days walking past adult sex shops and the Moulin Rouge. The hotel wasn’t flash, but was adequate and had a bed rather than a couch, as opposed to certain other hotels I could mention. This was welcome.

I set about finding places to eat and discovering what other tourists do, thanks to the guy behind the desk. It was, let me tell you, a little cold and I was grateful that my London relations had dragged me out to buy a big, thick coat and sensible shoes when they saw what I had brought from Melbourne. All the more sympathy, then, for the beggars on the streets in Montmartre, whose hands are chapped and whose small children are shivering. Being poor, cold and hungry is a terrible thing.

I did a couple of days of Woman Eating Alone, and then I discovered that one of the many tour busses had a stop very close to where I was staying. You get a ticket for three days, from memory, and can hop on and off the various busses that take different routes around Paris.

That first day, I discovered what cold was all about. As did other tourists, who withstood the rawness on the top of the bus (unroofed) for as long as possible before retreating downstairs until the blood thawed enough. Or descended shakily to find a coffee or some hot meal before taking on the winds skirling around the Arc De Triomphe. We would all, no doubt, absolutely love Paris in the Springtime.

On the second day, I remembered my black felt hat, around which I wound my woolly scarf. 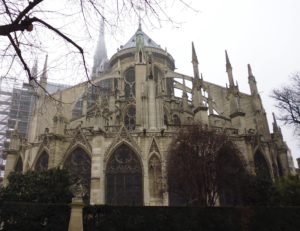 Anyway, what I remember of the bus-trips (aside from wiping the tears from my eyes and warming my nose with my gloves) is that Paris is superbly elegant, full of bling, and the traffic seems to know what it’s doing even though I did not. I must come back sometime when it’s warmer. Shivering is so distracting when faced with such a display of gold, marble and Haussmanesque elegance. Pics here include the not-so-well-known back end of Notre Dame (which, to my surprise, has had renovations done to it in, I think, the 19th century); the front end; 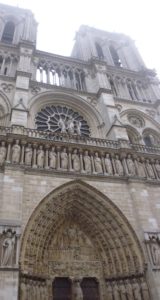 a Paris street; some foggy Seine; the Eiffel Tower, shrouded in fog and at a rakish angle as seen through the bus window; and an equestrian fellow in 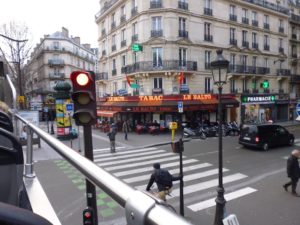 the courtyard at the Louvre. 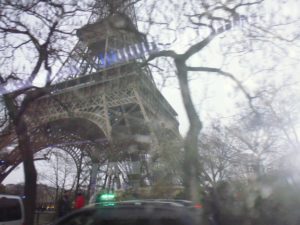 Speaking of the Louvre, it is certainly true that you could probably spend a couple of lifetimes exploring all of it. Why, it took me the best part of an afternoon just looking at Greeks and Romans. And Tuscans. The extent of the collection is breathtaking, and the impression of the three major cultures – linked but yet so different in many ways – is no less so. My one piece of discomfort comes, however, in realising that the collection is magnificent probably only because many temples have been denuded to make it so. A fault shared with the British, of course. 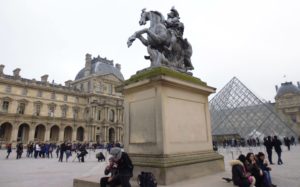 And so on it went, around Paris. On the second or third day, however, I became aware at one point of the numbers of police hanging around on street corners, dressed in black, hung about with Kalashnikovs and so on. A lot of them, I thought, and I grumbled to myself at how much Parisian police are in your face.

When I staggered back to my hotel to melt the ice out of my bones, I settled down to check my facebook and emails, as you do. And found a chorus of plaintive messages, especially from my sons, and one from my eldest son’s girlfriend insisting I respond no matter what time it was at home. Lord! 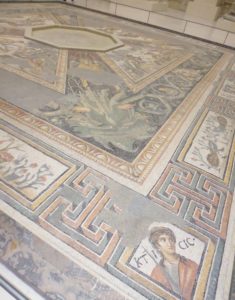 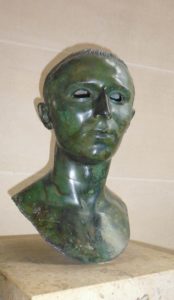 And that was how I found out about the Charlie Hebdo attack. After assuring everyone that I was still alive, I found some TV news to tell me the rest. Not wanting to get lost or trampled amongst one million people in a strange city, I didn’t attempt to find the massive rally held later, but followed it on Facebook. Nothing that I can say here could properly memorialise that terrible event.

The next day, I met up with a photographer friend, Lucia Rossi, and we took ourselves to the Père La Chaise cemetery. Cemeteries, as I have mentioned before, are culturally important places. And anyone who was anyone was buried in this one, truly.  Pere La Chaise is enormous, and laid out neatly in streets. It really is a city of the dead. Enormous thought has gone into some of these burial sites. Unfortunately, my battery ran out just as we got up to Oscar Wilde. Sorry. 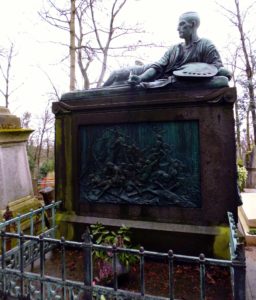 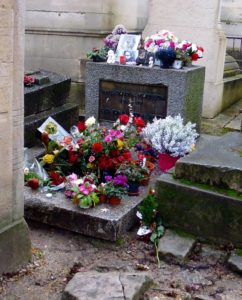 There was, as I had been apprised that there would be, a bunch of ageing ex-hippies apparently permanently attached to the modest grave of Jim Morrison, which is always strewn with flowers; Gericault’s tomb bears a relief of his best-known work, the Raft of the Medusa; some unknowns have some effigies of the very best, paid for by grieving families and friends; and Delacroix demonstrates a grand austerity befitting an ancestor of mine (which he may or may not be.) 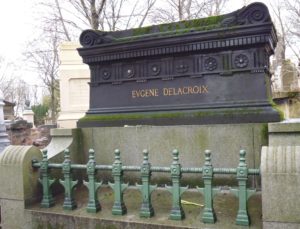 At the end of this visit, Lucia and I went off to find a drink, which is when we discovered there had been another terrorist attempt – rather close to where we were – at a supermarket.

Another day, and some more exploration of Paris with another friend, Jean-Luc, who spent many years in Australia. There was lunch, featuring bone marrows (which are, I think, something you have to get accustomed to) and a panoramic view of Paris, including the new black tower that is the cause of so much emotion currently.

Eventually, a much cheaper taxi took me back to the station, we struggled with the monumental case, and a very fast train took me to Beziers, in Languedoc (now Occitanie), to wait for the estate agent. And wait and wait. In the cold and propping up my enormous case …  Anyway, eventually, he turned up and we went to my new house via a supermarket (how wise!). He fiddled with the heater and thought he may have turned it on (much more on this thing in blogs to come), clicked a few switches and… there was light.  Furniture came with the house, by the way.

The agent left, I startled a neighbour by opening the shutters, and there I was.