Agde, floods, signing up and shipping out

Sneakiness and good timing meant that I could in fact escape the hotel for a meal occasionally, without being called back to eat with the family. I assume their kindly concern was for that ubiquitous object of puzzlement, The Woman Alone. I experienced that phenomenon again at the little restaurant around the corner (small, with terrace and view across the cobbled road to the river), when a passing man clearly under the influence ofpastis and several bottles of his favourite wine yelled out his distress that a poor woman was having to dine alone.

Well, thanks for that. *Rolls eyes.

Things settled down and pretty soon a table nearby became of riveting interest,  with the rising volume of its occupants’ passion about French and world politics. There were many declamations and declarations, and my waiter, in his wry and witty manner, advised me that the man in the group was a well-known actor. I asked if the ladies were too, and he said no, though clearly he thought my question amusing.

I decided this was now my local, default restaurant and returned a couple of nights later. Alas, all was quiet. Even the waiter apologised for the lack of a ‘spectacle’ that night. We all smirked together.

During the day, there were of course phone calls to my agent organising a time to meet up with the notaire who would present me the first of several documents to sign and thus push the process of house-buying closer to a point of no return. Other than that, there was a bus-trip to Agde Plage, or the Grau D’Agde … which was disappointing. Known mostly for its rather small beaches of black sand, its enormous occasional population of nudists and its enormous crowd of holiday apartments that all look exactly the same. Not to my taste, really, so I was happy to get back to the old Agde, its black basalt, ancient doorways and glimpses of really interesting public art, and the duck family passing occasionally on the river.

A walk through the streets of Agde, as is true no doubt of many ancient villages in France and elsewhere, is to tread between the modern and the ancient. At a point where two tiny streets crossed, I could both see the history that stretched back to the 12th century, and hear the present in the motorbike revving up to give a lift to a mini-skirted girlfriend. Life continues; this is no museum.

The day came when I was meant to go see the notaire, being meant to be driven there by Y the agent. But it turned out the weather was turning nasty, and what I’d thought were a few lightning flashes the night before had turned into rising waters and an insurmountable difficulty for Y as he attempted to leave Montpellier, where he lived. By the following morning it was obvious floods were a real and present danger throughout Hérault, and the news abroad was all of the drowning death of campers caught by surprise as the waters swept them away. 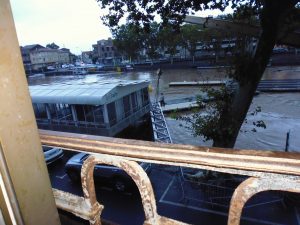 I sat at the window of the hotel at breakfast (it had been decided that today this would be available before 9am after all – see the previous blog-episode) and watched a drama play out on the river, where a pontoon and platform had been pushed by the water from the middle of the river right over against a floating restaurant. There was a quantity of mangled metal, and a team of police and/or emergency workers was there with a crane to drag it away. This would necessitate attaching a chain to the various bits, and to this end a member of the team leapt from pile to pile of mangled metal to work out how. It was a lot like an episode of some rescue-team/cop-show on TV, complete with handsome and death-defying hero. My coffee cooled in the cup as I watched. After a while the hero realised that he had no vest and perhaps he should have one, and I felt able to continue with breakfast. I’d been worried – after all, it was pretty clear anyone falling into that rushing and muscle-bound water would not survive for long. 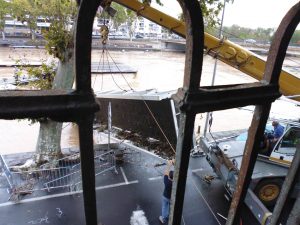 The bent pontoon and platform were pulled out, cleaned up and taken away. The rest of the morning was interesting mostly for the number of police going about the streets asking people at hotels and cafes if they had left their car by the river, as these were under imminent threat.

The next day, things had settled down. The mother duck travelled slowly up the river, on her own, saying ‘wack, wack’ sadly, in search of her lost ducklings.

Before leaving Agde, I made one more attempt to find the ritzy restaurant I had misplaced the first night in Agde, and this time succeeded. I was The Woman Alone once more, though this time placed at the table next to The Man Alone. We both feigned a deep interest in our reading matter. The food was wonderful, and the wine was both beautiful and a fraction of the cost of anything like it in Melbourne. O, yes! I made my way back with great dignity over the cobbles – despite my heels – and fell onto my couch for the night.

And so my stay was at an end, Y was able to fetch me, we hurtled across the countryside to meet with the notaire and sign what had to be signed, and he dropped me off at the station just in time to start my long trip back. Yes indeed, very fine timing involved.

Now, while the fast trains are a boon and ought definitely to be introduced into Australia and anywhere without them – not everything goes smoothly all the time. This may have been my punishment for having found a cheap ticket, but the train got stuck part-way for … oh… an hour and a half, I think. Patience was thick in the air. People greeted the guy with the complaints-forms with an air of long-suffering and filled in their application for a refund. I didn’t really think that would work for me, so I didn’t. Luckily, and arising out of my life-experience that tells me always to give enough time for stuff-ups, I was going to be spending the night in a hotel before leaving Paris for Oz the next day.

Eventually, we got to the Gare de Lyons, where I had to get on a bus. Had it not been for the guy chucking the bags into the back, I would never have known what terminal to get off at Charles De Gaulle airport.

Because CDG is enormous. It’s like a satellite city. Or a series of satellite cities; there are huge disk-shaped buildings and fly-over roads going everywhere. Then you get off and, bedazzled, attempt to find the right section and right level for the bus to the hotel. Which is … somewhere. Groups of employees may or may not be of help. Best, I find, to sidle up to other passengers. Some might even speak English.

Finally, I and a number of other passengers found a lift that took us to the place where busses hurtle up, gather people, and hurtle off. We worked how you could tell which one would take you to your hotel (each bus has a row of hotel insignias somewhere on its chassis), and then we hung on to seats and straps for dear life while the bus headed of into the night along a convoluted road-system for twenty minutes or so. I quipped to a fellow passenger that we could be kidnapped and no-one would ever find us. I’m not sure that went down very well.

On the bus I met a man who had been going to Italy that day, but had not arrived at CDG early enough and had missed his plane. I thought: ‘how careless’, but commiserated with him. He probably wasn’t careless, as it turned out. It would be very easy to do.

Next day, I headed for the airport good and early – many hours early, mostly because there wasn’t much else to do and I just felt safer that way. And what a good idea that was. It took a while to work out where I was supposed to be, for a start, and then, when I got there, there was a queue of between 400 to 500 people waiting to get not so much to the gates as to the gate that leads to the gates. They were, at least, an interesting crowd, I guess. Many seemed to be Muslims, all in white, perhaps headed excitedly to a great occasion – the Haj perhaps, in Saudi? We all looked up and glared or smiled forgivingly at the First Class and Business passengers, who walked straight past and on through. Our queue was so long we were doubled back on each other to save space.

The plane ride back to Oz was, in all its legs, long. I made one mistake. I actually fell asleep for some hours, which you may think is a good thing but really, really isn’t. When you sleep you don’t stretch and you don’t drink water. Consequently, when I was trying to sleep later in Melbourne, both legs were suddenly clenched in the worst cramp I have ever felt in my life. I was hard-pressed trying to rub and stretch one while the other was attempting to imitate a pretzel. The pain was astonishing. Scared to try sleep, when the worst was over, I found myself online looking up the price of Business Class (absolutely out of the question) and then Economy Plus (sadly not much better).

Next day I found a small Thai woman in a massage place, who beat me up in a highly satisfactory and therapeutic manner for an hour or so and left me feeling limp but happy.

I’m told Magnesium tablets are good for the prevention of cramp, and will remember that for later. This may prove important.