In which I make a trip to France to make its acquaintance and to choose from my short-list of houses.

I am here. I have slept a lot, as you might expect after seven hours from Melbourne to Malaysia (lo! I had two spare seats to sprawl over), then three hours of delays sitting on the tarmac, then twelve hours from Malaysia to Paris (crammed up next to the window and to become very close friends with those who must be climbed over from time to time), and much more besides. I did have my sympathies with the captain of the plane, whose mounting embarrassment and frustration was there for all to hear through his many obligatory announcements – becoming more and more curt and grumpy as time went on – until we were finally able to lift off and head toward Europe.

I should add here for worried friends and relations that we were flying very high when crossing over the Middle East, and missed Iraq altogether while crossing the possibly less murderously-equipped (from the point of view of an aeroplane) Afghanistan. Just joking, in a way. Yes, poor Air Malaysia has recently had a disappearance and a shooting-down, but frankly this can happen to anyone. There will be conspiracy theories, even more than is warranted, to be sure, but the fact remains that planes do sometimes come down in a tragically unscheduled way. Still, it does all focus the attention when problems are found with the undercarriage as the plane awaits takeoff. We were all quietly stoic.

Anyway, then add hours waiting around in the railway station attached to the Charles de Gaulle airport on account’ve the delayed plane meant I missed my very fast train (TGV) and I had to get new tickets. That is, of course, having had to find the way to the railway station from CDG, which was not – to me – all that easy. It involved a conversation with a nice man in a uniform, filled with those shrugs and silences you get when neither person really speaks the other person’s language, then clattering off with my little wheeled bag in the general direction of the finger and various tiny signs, along a corridor, downstairs, until I found the internal CDG train system that takes you … somewhere … and then another wander until the actual station become evident. Joining the wrong queue at first, of course. Avoiding those life-size He Men and Women prowling, or should I say patrolling, with their jungle greens and automatic rifles. (There is a strange fascination to be had for overly-muscled man and women who stroll about armed to the teeth. Weird. You catch yourself staring and then looking away quickly, which may give entirely the wrong kind of impression.)

Suffice to say we all hope the cost of the three-hour delay can be reimbursed by Malaysian Airlines.

Timing was completely off for the day, it turned out. At least, it was for me. I hopped on the train, chatted to the nice André, who was back from six months in Asia and hoping his job was still available, and found that this train, too, was late into the station where I was to change for the train to Montpellier. André tried to help me:  first, to catch the train that had, in any case, whooshed off already, and then to find a counter person to tell me what to do. Turned out they had to give me a new ticket. Judging by the patient sigh of the person behind the counter, I gather this is a common thing. Then there was another couple of hours to Montpellier.

I had of course, no idea of the relativities of everything, and assumed everyone else would.  They don’t necessarily of course, as I found when I rattled and bounced over to the Information counter and had a short discussion about how to get to this campsite in a place no-one in Montpellier had ever heard of. A taxi? I asked. Good lord no, or words to that effect. They’d looked up little Adissan, and shook their heads absolutely. Much too far away. Nor was there a bus at this time of day. So, then to the train to Béziers for another hour.

I arrived in Béziers; it was getting late and I was tired and I had no idea how far the fabled caravan park outside Adissan was. What’s a girl to do? I caught a taxi to this place, driven by a man with an accent where every word ended in ‘ng’ and, oddly, could almost have been from a broadly-Strine Queenslander with a bent for French. We went for many kilometres, around and around and up and down, which cost me such a vast sum I am too embarrassed to mention it. I have provided this man with the means for an extended holiday in the Seychelles for himself and his entire family, I swear. You know, I chose this park because it was the cheapest accommodation I could find. This voyage into financial lunacy made me, understandably, exceedingly grumpy. The humiliation. It does remind me of the time a decade or so ago when I bought some shoes in Jakarta and couldn’t fail to notice the sellers high-fiving each other as they pocketed the loot. Only this time, even I thought it was an enormous amount of loot. Cringe.

One of the estate agents showing me around houses later commented that, on arrival in Béziers, no-one takes a taxi more than once, and that, presumably, all taxis depend on new arrivals being too exhausted to properly check just where their campsite/B&B actually is ….

Anyway, here I am at Camp Grenada. No, of course not. Here I am at Camping Les Clairettes, whose name, I gather, has something to do with the local wine/vineyards around here. I began my stay in utter humiliation, what with the taxi and all. But now I’ve settled a bit and I quite like it. I would be even fonder of it had I not developed those blisters/massive buboes/gigantic watermelons on my feet that prevented me tramping off to the local bus for some days. But these are much better now, thanks. I do, however, regret not bringing a pair of bathers. It is over 30 degrees every day and there’s a pool, dammit. 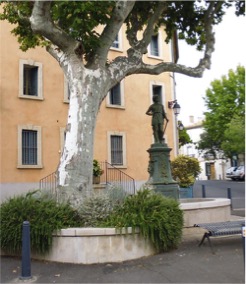 It’s like this everywhere. And here is a very charming and rather lovely statue:

However, most days the birds are singing and I sleep well in my little cabin. I’ve had very French breakfasts and discovered I can use the Net in the public areas, where I skype my boys. I’ve even introduced them to the woman who helps run Les Clairettes, to the amusement of all. And I have found the bus to take me into Pézenas – a largely Nationally-Trusted little town that is simply beautiful in a very medieval way. The bus-stop to get there is in little Adissan, a fifteen-minute walk from this caravan park, past vineyards and sheds and the some horses, a goat and a donkey.

I was told the bus-stop is at the church. This is true. You can’t miss it. The church pictured, that I have used as the main image, is from the 14th century or thereabouts. 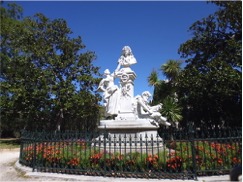 In Pézenas, there is much fuss made about Molière, who lived and worked there for a couple of years rathera long time ago, and then became famous. Everything is named after him. A hotel and restaurant, a park, streets. In summer – before I got here, unfortunately – there is an annual festival that includes a piece of theatre dedicated to Himself. I will attend this when I am a proper resident. Here is Molière in his park

And so I now continue my adventures, which include finding a mobile phone so that agents and I can contact each other. Sadly, these adventures must happen despite the blisters on my feet. These are apparently inevitable with every new pair of sandals that I buy, no matter how comfortable they look. And, as you might know, in France we walk a lot. 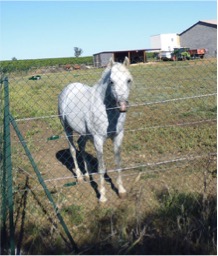 Speaking of walking, there is a rather nice white horse between the camping site and little Adissan, who began by being shy of me and hiding his head behind a distant shed, because of course then I couldn’t possibly see him/her. Now he/she comes up to the fence and we exchange pleasantries:

Next week, some decisions get made.