Those who have kept up with this series of blogs on Victorians (and of course you ALL have) will know by now that in that age, all was not quite as the novelists described. Humans, after all, are complex creatures, and aren’t always inclined to reveal all of the warts. Often, of course, they aren’t even aware of their own blemishes. We all set up an ideal, and most of us would like to think the ideal is the norm.

But enough of this philosophising.

Fans. I have lately become very keen on fans. All kinds, but in this case, the kind that you carry in your bag to tone down the effects of a southern French summer where temperatures can hover around 35 degrees or higher for a couple of months on end. Melburnians will know that this is not to be supported. We know that ‘normal’ is a summer where temperatures can leap to 40-something and in the afternoon plummet to 24. This is called a ‘cool change’ and is a regular event in Melbourne, but not in the Hérault.

But I digress. Also, you will be raising your eyebrows because we were in fact discussing British Victorians, for whom 35 degrees Centigrade all at the same time were and are a nightmare only to be read about. However, if heavily dressed from neck (or décolletage) to foot and making your way through overcrowded and unventilated public or private public spaces, while cinched in breathlessly as part of fashion…well, it comes to much the same thing. A fan is necessary.

And (almost) everyone female had at least one, of course. Well, perhaps not those working on farms or factories. Or fishwives, or urchins…

In a  (bourgeois) society where flirting went on, of course, but at least officially was frowned upon, social discourse developed its own language. With its own tools for communication.

Waggling your eyebrows was at a minimum. Smirking was a bit obvious. Winking was absolutely out.

You could, however, catch that young man’s eye and create a definite frisson with your fan. And, they say, people did. It was not such a secret, either. There were manuals. Well, directions. Just remember Oscar Wilde’s Lady Windermere’s Fan, from 1892.

There are other views, of course. This one has it that the whole idea of a language of fans is a fantasy invented in 1771. Perhaps the story lies somewhere in the middle. 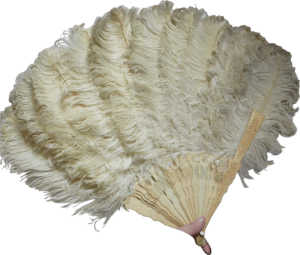 For example, while Sotheby’s (see link below) says that 1927 Parisian fan-maker and retailer Duvelleroy did print a leaflet on this alarmingly complex language, it shouldn’t come as a surprise that this was probably a device to boost sales. Still, the leaflet did its thing and Duvelleroy shot to great heights in new Bond Street and as supplier to Victoria herself.

I’ll just list some of the fan flirtations, gleaned from here https://www.sothebys.com/en/articles/the-secret-language-of-fans

On reading this list, I did start to wonder what the other side of the conversation looked like. Was there an equally complex language to do with cravats or gloves? I certainly haven’t heard of one.

Anyway, since now is the season of parties, I recommend buying a fan and trying this out. Some people will be puzzled, no doubt. Clearly, too, this should come with a warning: don’t confuse your left hand with your right, and make sure your interlocutor is equally adept, given they will be receiving the message in mirror image, as it were.

Have fun, and Merry Christmas!