Women have been sewing for everybody else for millennia. Straining their eyes late into the night – try to imagine trying to thread a needle or keep the stitching straight and tiny in candlelight. And that would no doubt have been just the one candle, given the cost. In northern climes, such as anywhere in Britain, winter months mean the fall of darkness from around 4pm. So we can assume much peering and squinting was the lot of the seamstress. And everyone female, unless at the very top of the social hierarchy, was a seamstress to some extent.

Those at the top whiled away the intensely boring female hours with decorative arts such as samplers and embroidery (and a little sketching, water-colouring, piano-playing and whatever). After all, most of the active pursuits of the upper classes were largely male ones. So, essentially, to have the X chromosome was to sew.

You may have had a brain the size of the universe, but a shirt could take 14 hours to make, so get to it. Imagine how much time a multi-layered get-up complete with lace and a hundred tiny pleats would have taken.

Anyway, you get the drift. Sewing and its role in women’s lives was no small thing. And, yet again, here is an example of how the industrial revolution threw the pattern of lives up in the air.

At first, efforts to make machines to sew were a little clunky. There had been much fiddling around with the notion for a good hundred years before something generally useable was produced around the mid-nineteenth century. There had been various updating of the tools mainly involved – the needle – so that, for example, chain-stitching could be employed, and also crochet hooks. Embroidery led to variations, with some of the problems being the kind of material that had come into fashion.

One of the earlier and most serious attempts at an actual machine was produced by Thomas Saint in 1790, and mostly roundly ignored. 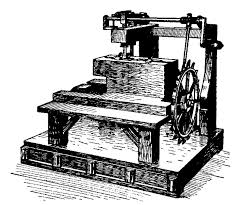 This was apparently because the catchily-titled patent ‘An Entire New Method of Making and Completing Shoes, Boots, Splatterdashes, Clogs and Other Articles by Means of Tools and Machines also Invented by Me for that Purpose, and of Certain Compositions of the Nature of Japan or Varnish, which will be very advantageous in many useful Applications’ was classed under wearing apparel. No, I don’t know what a splatterdash was. Not immediately evident from the name, the patent also included an attempt at a sewing machine, but was as yet a very awkward design not yet fitted to the job. Mr Saint’s machine failed to take off (as it were), and in 1874 even someone trying to building one from the description had to modify it before it could do any stitching at all.

Still, the thought was there.

In 1804, a couple of different attempts were made – one to actually join pieces of cloth to each other (which needed constant rethreading, and, obviously, as with every other approach did not include the input of women into the design); and another for embroidery. I’m not going to go into a long list of the various inventions that were produced over the next few years, not all of which were in any way practicable and some of which weren’t either patented or commercialized. Some are simply legendary, such as a mystery machine for the purpose of imitating backstitch, apparently invented some time in 1818-1819 in Vermont, USA.

Other American inventions, including a leather-sewing device, were lost to the ages because of the patent Office fire of 1836. The authorities did put out a call to patentees to send their descriptions again, but apparently most couldn’t be bothered.

We were nearly there with the device invented by French tailor Barthelemy Thimonnier, 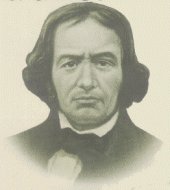 who struggled over his idea until he finally brought it out in 1830. It was initially really meant for embroidery, but he saw it could also be more utilitarian. In 1841, 80 of his machines were happily bringing our army uniforms, but other tailors were intensely fearful for their professions, broke his machinery and essentially drove him out of town. He found some funding, however, and got back into a new improved version, set up the first French sewing-machine company and was then brought undone, again, by the Revolution of 1848. As I understand it, the revolutions left him dangling and then his machine was surpassed by better ones. He put up other patents, but still died a poor man.

Lest there should be much scoffing at the tailors who initially spoiled his enterprise, it should of course be remembered that a living is a living – entailing the purchase of lodging and food for babies and so on – and that they were no doubt appalled by the prospect of having no living at all or perhaps only a poorly paid one working under factory conditions for not very much money.

In the meantime, variations on the Thimonnier theme were popping up elsewhere, including in America. Walter Hunt had a go, but even though his machine showed promise, he didn’t think it significant enough to pursue. Another sewing invention foundered in a morass of patent suits; though Elias Howe, its producer, is often credited as the real inventor of the sewing machine… or its ancestor. He did persevere, though, what with litigation here and there, took a long time to establish himself in manufacturing. Another invention, in the meantime, popped up in Austria, was found to have a faulty mechanism and needed work, its inventor made no profit from it and died in a poorhouse.

Finally (flourish of trumpets!), up rose the I.M. Singer Company in the 1850s, after a string of patents had been brought out by various people with not a lot of success.

I am now lost in a plethora of tales of success (not frequent), partial success (more frequent) and total failure (most common) of inventors and their inventions. All of the details, including what these machines actually did, can be found here, in parts one and two: https://www.fiddlebase.com/the-invention-of-the-sewing-machine-by-grace-rogers-cooper/the-invention-of-sewing-machine-part-1/(and my thanks to Rachel Thornton for this additional link:  https://www.bbc.com/news/business-50673541?fbclid=IwAR1_mkeXRO5HoJe5Qd143YP6Nsjk25KjxuLNGeIfiDg_vBKUJj1OqafJm7o

I will concentrate just briefly on the most famous – Singer. After all, it was a Singer Letter A Sewing Machine, brand new in 1859, that was acquired by Adelaide Hadley in 1860, by plundering the funds still available to her before the impending passing of her husband George. 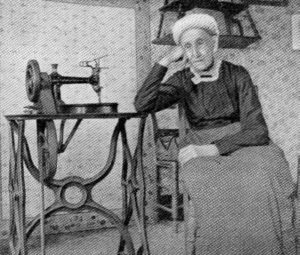 If you haven’t read What Empty Things Are These, you won’t know of this. The is of course available everywhere books are on sale. Just saying.

Mr Isaac Merritt Singer, of sewing machines fame, was something of a cad and philanderer. He fathered at least 22 children, and I’m not certain that he contributed to their wellbeing. He was also a bigamist.

He is, however, credited with improving the design of the sewing machine. Suddenly, you could sit down and put together a shirt in under an hour.

Singer benefited from the law’s (or a lawyer’s) bringing the various patent warriors together so that the various parts that people had invented could now be put together. And he was good at marketing, which was not something many of his processor sewing-machine-inventors could boast. People could rent one; they’d get a regular visit from a maintenance guy.

Singer was no feminist, but as a budding capitalist he was keen to attract women to his machine(s). His shop window featured young women hard at their sewing, proving women has the capacity to use the machine (yes I know), and he pointed out that a machine could help a women gain an income and, presumably, some independence.

Seamstresses could finally rest their eyes at night.

We should of course be careful not to assume that all was thenceforth milk, honey, peace and harmony. We do know that sweatshops exist nowadays, that guarantee, as ever, that women are underpaid and overworked for sewing; and in the nineteenth century it wasn’t long before this new genre of sweated labour came about. 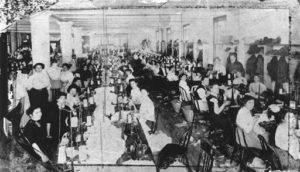 By the middle of the century, machines were churning out army wear, then various forms of general men’s wear. Women’s fashions still largely necessitated close fitting, but this changed at the turn of the century and off-the-peg clothing took off.