In which clever Victorians, all without ever having seen a germ, turn a noxious Thames (almost) sweet, saving thousands of lives.

John Snow was a number of things. Besides personifying the Victorian expansion of the middle classes (and you have, of course read the blog on the subject of that expansion on my website), he was a bit of a personal puritan – as a vegetarian who would only drink pure, distilled water – and the kind of intelligent person who asks questions in the midst of ignorance.

Due to John Snow, London discovered that cholera and drinking water are not good companions. He saved many lives, essentially, and all without ever having glimpsed a germ. 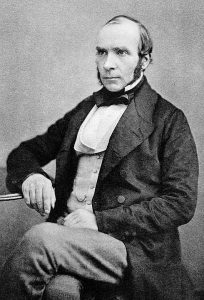 His dad was a labourer, and young John was surrounded by eight other children, for whom he was older brother. They lived cramped in a soggy area next to the River Ouse, which was contaminated by a redolent combination of gunk from the market, cemeteries and sewage.

Perhaps young John had begun to make his observations then; in any case it was clear he was bright and into mathematics. Things moved more quickly in those days, so by fourteen he was a medical apprentice, then surgeon-apothecary apprentice, then experienced in the effects and treatment of cholera as it ravaged the coal-mining village of Killingworth.

At the Newcastle Infirmary in the 1830s, John’s colleague, fellow surgeon Thomas Greenhow, worked with him on research into England’s cholera epidemics. John graduated from university (of London) and joined the Royal College of Physicians, so we shouldn’t be surprised that he helped found the Epidemiological Society of London, as cholera rampaged amongst London’s poor.

Our John had already become recognised for his scientific and clinical demonstrations, and his interest in anaesthesiology and respiratory problems. His work on chloroform in childbirth gained him a great fan in Queen Victoria, who called him in for the birth of a couple of her many children. Consequently, the Anglican Church was obliged to back down on its disapproval of such aids.

All of which is beside the point (which is cholera, you’ll recall) except to say that John Snow was widely respected. He is known, unsurprisingly after his discoveries, as the ‘father of epidemiology.’

Wisely for the time, John Snow was not impressed by the prevailing theory that ‘bad air’ caused diseases such as cholera and bubonic plague. Nobody had come up with germ theory at that stage, but he was observant enough to conclude that water played a big role in the Soho epidemic of 1854. Of course, there was already the example of Edward Jenner who also was unaware of germs and other microbes in 1796 when he came up with the smallpox vaccine. But he had observed that milkmaids who’d contracted cowpox rarely came down with smallpox.

Anyway. John examined a sample of water from the local Broad Street pump, which actually didn’t prove much, but he knew enough about patterns of the disease to argue the council should disable the well pump by removing its handle. He himself was unconvinced that this had done the trick entirely of itself, and thought the epidemic was already abating by then. But further work pinpointing clusters and using statistics demonstrated to him that the Southwark and Vauxhall Waterworks company was delivering sewage-rich water to homes. 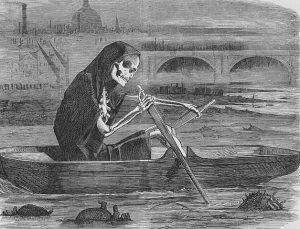 The Silent Highwayman – in Punch Magazine, 1858

This was pretty revolutionary. It’s amazing what you can do with the scientific observation of patterns, and just shows that investigation can have many levels. The well, incidentally, had been dug less than a metre from an old cesspit, which was leaking faecal bacteria, largely from the cloth nappy that had washed into the pit from a baby already infected with cholera. There you are.

The cholera epidemic died away. Local officials breathed a sigh of relief, decided not to believe John Snow and replaced the Broad Street pump handle. Victorians weren’t keen on the theory that disease could arise from drinking (or eating) poo. 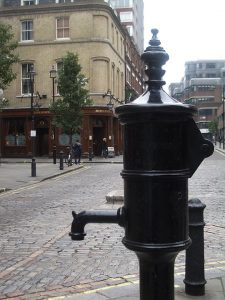 Memorial to John Snow, with thanks to Wikipedia

The day (and lives) was saved when, in 1866, an opponent of Snow’s, William Farr, realised the error of his ways. He had to admit that the cholera outbreak at Bromley by Bow was due to unsafe water. He ordered that water must be boiled before it could be drunk. He didn’t want to admit Snow’s explanation, but still.

Snow, however, did not live a long and fruitful life resounding to the accolades of his peers. Sadly, he died of a stroke in 1858, at only 45.

Had he lived, he would have approved of the sewer works of Mr Joseph Bazelgette. Joseph came to the rescue of a London ponging badly from the refuse and general effluent pouring at a great rate directly into the Thames. Wherever possible, people tried to ensure their waste was sent into the great river rather than anywhere near them. Consequently, the Thames was a bit hard to take. 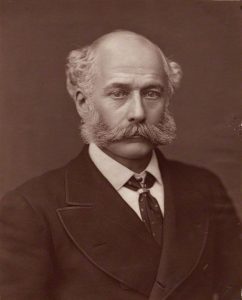 You’ll remember reference to The Great Stink of 1858, in What Empty Things Are These? No? Well, go buy the book! Goodness me! 1858 was the year when Parliament finally decided that it could no longer put off a vast modernisation of the sewerage system. Urgings to put such works in progress had been made since the early 1700s, but the good burghers and Lords couldn’t quite come at the cost. But the hot summer of 1858 was eyewateringly stinky and the Members were actually driven by it from Parliament itself. Joseph Bazelgette’s proposals to move the general effluent eastwards and out to sea were finally accepted and paid for.

After all, even with the prevailing view of diseases such as cholera being due to ‘miasma’, the state of the Thames was alarming. Flush toilets didn’t help; but there was also all the waste from abattoirs and all of the putrid mess from thousands of industries. You could see the air wavering with it, in spots. And, of course, cholera would break out with monotonous regularity and kill hundreds or thousands of people every time. And then, due to the sewerage system built by Joseph Bazelgette, it didn’t.

Historian Peter Ackroyd says Joseph Bazelgette should be considered a hero of London. Add to that John Snow, I think, and you have two much worthier heros than any number of athletes, film stars or self-enriched men. Frankly.