….Nimes and the Pope’s new castle.

And so the hour-long trip to Montpellier by bus. In my last report I didn’t mention the slight confusion when I booked my seat. I thought they’d said three Euros for the trip, but when I went to pay I was told no, that’s one and a half Euros. One-way, you see.

So there I was, sometimes on my own, sometimes in the company of a couple of other passengers in this quite large bus. We passed very close to a herd of wind towers at one stage. I tried to take a photo, but could only get a blur and something that might have been the driver’s ear. Otherwise I can report that villages, as you travel east, look progressively more and more prosperous.

On arriving in Montpellier, I found there was then a trip to the station via light-rail, which, as every Australian from Victoria would know, is a long tram. All very new and quiet. Hushing all the way to the station through the suburbs of Montpellier. Thence to Nîmes by train, which was very, very crowded.

At Nîmes, I was picked up by my friend Alan (an Australian journalist I met on Facebook. No I don’t make a habit of going to places I don’t know to meet up with people I don’t know – Alan and I have plenty of mutual, real-time friends) and transported over hill and dale to his house and family about an hour out of Nîmes. His and his family’s hospitality was wonderful, as was their house. This was once a 17th century cow byre or farm building, whose history is written into its walls. Alan said that his father and he stood for some absorbing time noting all this – from the evidence of old roof lines to what used to be lintels and windows all declaring a long and eventful history on one surface. You can see him here, opening his front door. 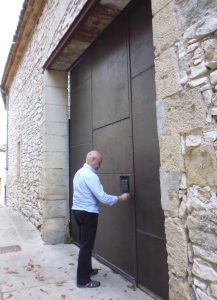 Two days around Nîmes is really not enough. But I did go into town for some hours, mostly in search of the old Roman amphitheatre. Nîmes was a very important port for the Romans, very central to operations both in France and for their adventures in Africa. The Nîmes insignia still includes a palm tree and a crocodile.

I knew, I confess, very little about Nîmes. Which explains my speechless amazement when I came across La Maison Carrée. This is, honestly, a Roman temple, built around 2 AD and dedicated to Augustus’s grandsons Gaius and Lucius Caesar. It is not a ruin by any means, its beauty and artistry is barely scratched,  and it stands tall above its sweeping steps while the rest of Nîmes saunters past doing its shopping.  Sometimes there is an advantage to knowing very little about a place you are exploring. I was astonished. 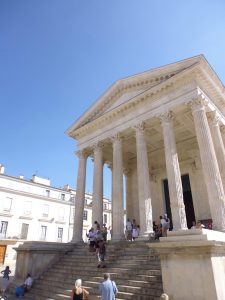 Having gathered my faculties together, I wandered off. I’d remembered I had no bathers and really, since it was still warm in September, I ought to buy some. So I bought something that might have suited my grandmother, though they were very cheap as only end-of-season granny bathers can be. Time then to consult the map and wander down tiny streets purporting to be on the way to the amphitheatre.

And there it was, and was and was …. For very many metres, on and on. Again, not a ruin, and very much in use. Pink, I understand, has played there. And there are even, or especially, bullfights and everything. Yes, bullfights. It is being renovated, but you could expect that in a 2000 year-old building.

I walked alongside it for some distance until I came to the café where Alan, his steps 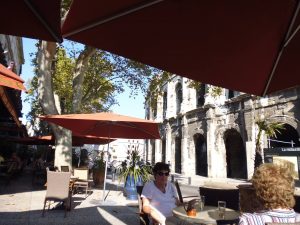 on Vincent and I had arranged to stop for a drink. We had a quiet one over the road from the amphitheatre, otherwise known as the Arène de Nimes.

A stroll around it later revealed it to be perfectly enormous. I heard that exits are known as ‘vormitoires’ which, I suppose, is something of a comment on the behaviour of crowds in and out the exits of buildings. And I met the statue of Nîmes’s favourite bull-fighter, Christian Montcouquiol.

Alan and his wife Chantal chose my visit as an opportunity (thank you!) for a short buying trip to Chateauneuf Du Pape, which is – perhaps I should have known this – a town and not just the name of top-class wine. Of which I managed to taste a decent range. See pic. 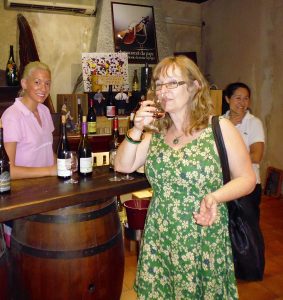 Some may be aware of a strange piece of history where the popes resided in France, during brawls between the church and the French Crown. This was in Avignon, very close to here, in the 14th century. And of course, the name of this particular ancient town, Chateauneuf Du Pape,  translates to ‘the Pope’s new castle.’ Some of which (the castle) is still standing. See pics. 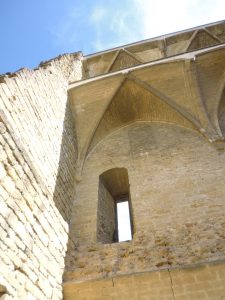 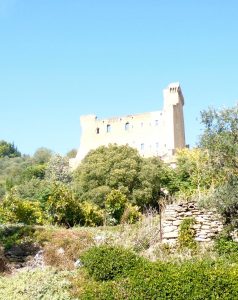 It is worth mentioning that on the way to Chateauneuf you can see (on a clear day) the Alps in the distance, which are on the border of three countries. It makes you think how very close everything is in Europe, and how traumatic must have been all those wars where neighbours – who may have visited the year before as tourists or traders – came to kill, rape and burn.

I really must go back to Nimes and surrounds sometime. There are the famous aquaduct as well as many other Roman sites to see. However, the time had come to hop back on the train and pick up the threads of my house-buying trip.

Don’t forget, clicking on ‘Likes’ back at the main blog page will tell me … that you liked it.